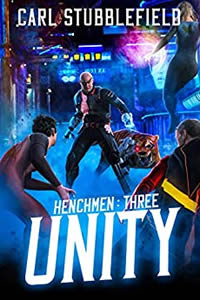 Gus is thrown back in action, still reeling from the sacrifices needed to protect the manor. He’s been thrust into a leadership position he feels ill-equipped to handle, and finds himself in a race to find answers. The fraying threads of his past are unraveling, and one mistake can mean they’ll be lost forever.

He teams up with ‘The Crew’, a singular group of supers assisting Gus’ father – Tempest – as he seeks to right a wrong from the past… but it may be too late. The Crew is tasked with finding the hybrid’s secret headquarters, hacking impregnable A.I.‘s, and making deals with criminals all while in enemy territory.

Powerful forces are watching Gus and want him as a pawn in their global game of conspiracies against all supers. Against his will, he has become the tipping point everything is balanced upon.

It’s all in a day’s work for the average super, but Gus isn’t sure if he can rise to the occasion, or if the pressure will crush him.