The World of Aether Chronicles 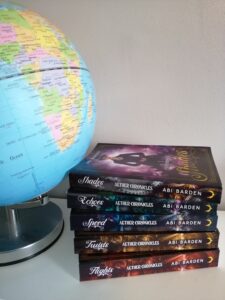 The world of Aether Chronicles is not too different from our own and mirrors some of the events of our world (loosely).

It is 1875, Queen Victoria reigns, Parliament sits in London, and the Empire is strong. The major difference is that back in the 1850s a new atmospheric gas was identified – aether. Aether has been found to be a useful, renewable, clean source of power. It also has additional properties that reveal themselves through the course of the series.

Aether can be harvested, purified, and put to use as a power source. Aether works in similar ways to electrical power. The arguments about whether AC or DC is safer are overshadowed by the rivalry with Aether. The similarity has led darker denizens of the aether industry to seek financial concessions for research and production from Parliament. A move the burgeoning electric industry is fighting.

Although Aether is relatively new, universities around the world offer degree courses in Aether Studies. London University has a whole department dedicated to it, as does the Massachusetts Institute of Technology. Although London University is very modern in its approach to the new science, it is less modern in dealings with female students – it won’t admit any. Thankfully certain professors see beyond that prejudice.

Aether engines are relatively small and light, this fuel is much less bulky than coal. Thus they are taking over from steam engines. This has allowed the development of new technology, such as aether lighting, and road conveyances, also known as cars. Similarly, airships are easier, cheaper, and more economic to build, more controllable too, opening up a world of travel. One of the best places in London to view airships is Hyde Park. Those who can afford private airships,  use the better facilities of Regents Park.

Society is much the same. The Queen resides mostly in Balmoral. London stands on the Thames, though new sewers and shifting to aether power, has reduced the stench. Mayfair remains the place to live, and Belgravia Square is highly regarded. If one is rich, both are certainly much better than the cul-de-sacs of Kew. The haves still have. The have-nots still don’t. Those in the middle, well, they make do, they cover up the bad bits and hope no one notices. So, typical human beings really.

Families always keep secrets. The Forester family skeleton, however, is less in the cupboard, and more in the aether. And when it steps out, Amethyst has to face a truth she never dreamed could be.

To see a list of all the books, check out my website, gailbwilliams.co.uk. Remember if you sign up for my newsletter between June 1 and June 8, you’ll be in with a chance of winning a free copy of “Shades” on Audible.