Greetings from Lake of the Ozarks!

I’m author Angela Roquet, and I’m so excited to be on the steampunk blog today! Big thanks to Coffee Time Romance & More for having me! I must confess, most of my works are urban fantasy (with reapers, and vampires, and witches, oh my). But I’ve always loved steampunk. And I couldn’t resist a side quest to write a steampunk novella trilogy. To be fair, steampunk adjacent might be more accurate.

I’ve never been very good at coloring inside the lines. Instead of Victorian England, I found myself in Pre-WWI Boston. But I hope purists of the genre will forgive me and appreciate the more traditional elements I included: a time machine, clockwork prosthetics, and airships with plasma cannons.

At first glance, Boston might seem an odd choice for a steampunk setting. But among the notable inventors who have called Boston home are Benjamin Franklin, Thomas Edison, and Alexander Graham Bell. Boston has the oldest subway tunnel in North America. It’s also the birthplace of the telephone, disposable blade razors, microwave ovens, Facebook, and even marshmallow fluff. *cue drooling*

Aside from Boston’s rich and innovative history, there are also some super fun oddities that made it an appealing setting. The lavender window glass in Beacon Hill—a mistake that later turned into a status symbol. The urban legend of privateer Captain Gruchy’s secret tunnels under the city. The memoir of criminal James Allen, bound in his own flesh and on display at the Boston Athenaeum. These tidbits and so many more provided constant fuel for my imagination and inspired the creation of Late Boston, where the World Clock Journals takes place. 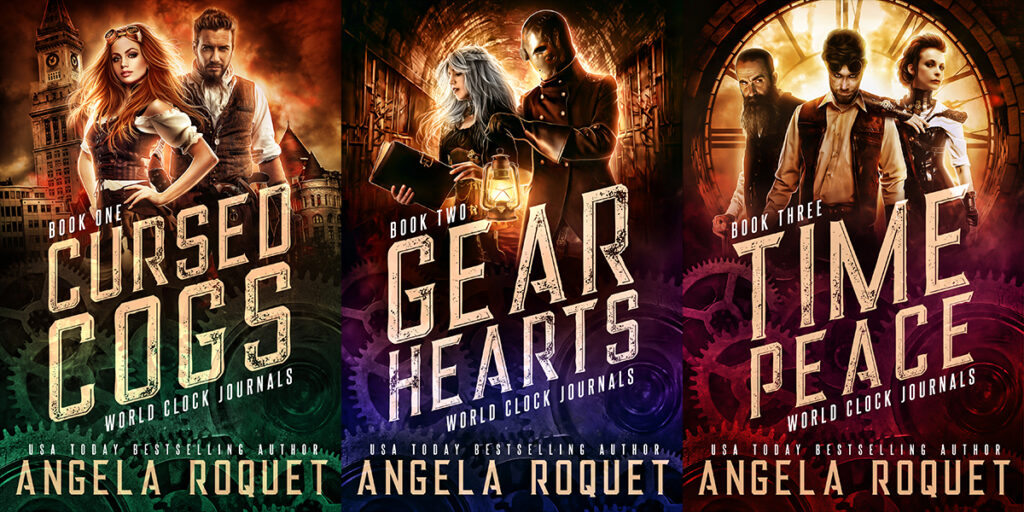 That’s all anyone is left with after Ezra Huxley’s time machine shatters reality in 1916, Boston. The mechanical abomination plagues the city with an hourly time warp signaled by the bells of the new Custom House Tower Clock.

Isla Huxley’s wedding ended in disaster after the Break, and now her husband is in a coma. She’s spent the last three months in the Post Boston Infirmary, waiting for her rich uncle to fix her life yet again. But when he instead sends her out into Late Boston to retrieve her father’s journal in hopes of fixing the time machine, she comes face to face with Dorian Verne, the man she once dreamed of having a future with before her uncle shipped her off to school in Europe.

Dorian lives a humble life as a clocksmith, but his skills are put to the test when the timeline-altered citizens of Late Boston come to him for mechanical remedies to survive the tolling of the bells from the cursed world clock. But Dorian was also Ezra’s apprentice, and when the inventor disappears, he vows to build a new time machine and set things right. Not just for those living on clockwork and borrowed time, but for Isla, the one who got away.

Find Cursed Cogs at your favorite e-bookstore and begin the trilogy today!

Coming up next: A preview chapter, a fancy steampunk giveaway, & a few free reads!