The Treason of Robyn Hood, a dieselpunk adventure by D. Lieber

Hi again. It’s me, D. Lieber, urban fantasy author, steampunk, and…well, and a lot of other things. As I mentioned, today is release day! Yay! I’m super excited to tell you about my brand new dieselpunk adventure The Treason of Robyn Hood. Check it out. 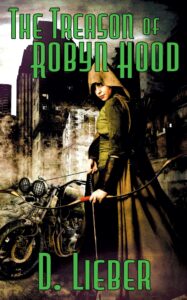 What is the price of justice?

As a ward of the Lacklands, Robyn Loxley has lived a privileged life. Even now, in 1942, when another war ravages the world and people on the home front must do without, her adopted family is not affected by the rations and shortages.

That’s not to say she hasn’t been affected by the war personally. As Robyn hits yet another roadblock in her quest to see her best friend Will, trapped in a Japanese-American concentration camp, she stumbles onto the people of Sherwood.

With dark truths revealed about the Lacklands and what really goes on in Midshire, Robyn must answer what justice means to her and what she’s willing to do to exact it.

Robyn and the merry band get an update in this dieselpunk adventure.

I can’t tell you how excited I am to share The Treason of Robyn Hood with the world. I’ve always loved Robin Hood stories, and I had a lot of fun playing with dieselpunk. I loved reimagining long beloved characters and putting them in a new setting.

One of the things I wanted to do with this book is to have a version like the old Robin Hood storybooks (specifically Howard Pyle’s The Merry Adventure of Robin Hood). So, I hired an illustrator, and together we created a special illustrated edition. Man, this thing has it all: the full page ink illustrations, the Lombardic capitals at the beginning of each chapter. We even modeled the cover after those vintage sci-fi magazine, plus the addition of bookbinding tape like on those classic hardcovers. 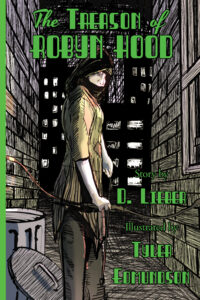 Unfortunately, I am waiting on print proofs for the special edition at the moment. With all the extra stuff in it, it required a longer production timeline. But it definitely be out soon, so if you’d like that edition, check my website for updates. Or sign up for my newsletter, and I will send you an email to let you know.

What the critics are saying

“The Treason of Robyn Hood has suspense, drama, humor, romance, and action, all jam-packed in a tightly paced novel full of intrigue…I enjoyed it immensely and will highly recommend it to fans of fantasy and adventure.” —Readers’ Favorite

“Connoisseurs of urban fantasy and offbeat romance will find this novel both a fun and fulfilling read. The clever characterizations and skillful melding of fantasy, adventure, and romance put a spotlight on sisterly devotion, oddball alliances, social conscience, and the human ability to rise above broken hearts and broken lives.” —The US Review of Books

“Urban fantasy readers usually don’t receive stories that include the trappings of an alternate history and updated steampunk themes, but The Treason of Robyn Hood‘s ability to incorporate both into its story of social justice and confrontation creates an atmosphere both familiar and alien at the same time. Thus, the original Robin Hood becomes an exploration of a feisty female’s determination and abilities, whether it be in battle or political cat-and-mouse games.”—D. Donovan, Senior Editor, Midwest Book Review