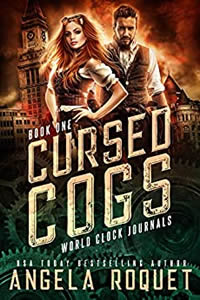 That's all anyone is left with after Ezra Huxley’s time machine shatters reality in 1916, Boston. The mechanical abomination plagues the city with an hourly time warp signaled by the bells of the new Custom House Clock Tower.

When Ezra disappears, it’s left to the World Clock Council to mend the timeline before the consequences become permanent—or worse, spread beyond the clocked zone, a quarantined section of the city dubbed Late Boston. The council enlists the help of Ezra’s estranged daughter. If Isla can track down her father’s blueprints for the machine, they might stand a chance at reversing the damage.

Dorian Verne, apprentice to the great inventor, is a genius in his own right, but his pride at discovering the missing component to complete the time machine is short-lived when it disastrously fails. Dorian vows to build a new machine and set things right. Not just for those living on clock-work and borrowed time, but for Isla, the one who got away.