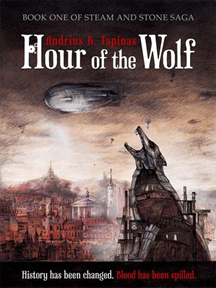 Hour of the Wolf

It is the year 1905 and Europe is not as we know it. Alchemists pilot steampunk airships over great cities, hardworking mechanics create automatons and deep in the dungeons secret societies of macabre wizards strive to create artificial intellect.

Blood has been spilled

Former US Marine Antanas Sidabras is exceptional at his job – enforcing public order in the ancient Free City of Vilnius. But a gruesome murder mystery at an abandoned cemetery leaves him at a loss. No clues, no motive, no suspect.

And...
A shadow has been awoken

With the biggest social event of the year – The Summit – looming just a few days ahead frantic investigation turns out to be a complex mystery of political intrigue and Sidabras has everybody against him – mad doctors, corrupt officials, Russian agents and monsters from his personal nightmares. And then, the bells will toll the Hour of the Wolf.

Will you live to see another day?

If you like alternate history fiction stories, science fiction adventure, unrelenting storytelling and steampunk setting – Hour of the Wolf will not disappoint.

This powerful steampunk and alternative history adventure is the biggest science fiction bestseller in Lithuania for the last decade. Animation series is already in the works and Hour of the Wolf became a major inspiration for a groundbreaking computer game – The Howler.