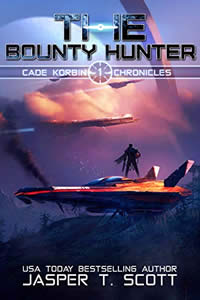 Cade Korbin became a bounty hunter because he knew what it was like to be hunted. What he didn’t know was who he’d end up hunting.

When it suited the Coalition, Cade was a Paladin, a member of their elite special forces. He did their dirty work and cleaned up their messes. Until his dark ops went public, and Cade was drummed out of the service with a dishonorable discharge. As if he’d ever been doing anything but following orders.

Forced to the fringes of society by his service record, Cade broke the law just to survive. Then the Enforcers caught him, and he served his time. Sick of the hypocrisy in the supposedly utopian Coalition, he crossed over to the other side and made a life among his former enemies in the Free Systems Alliance. Now he hunts the galaxy’s worst lowlifes, for a fee, and the only orders he takes are his own.

But when his past catches up with him, Cade is forced to fight for more than just credits…

This time, he’s in it for revenge. 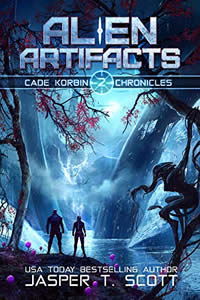 On his last job, Cade Korbin lost his ship, lost his credits, and barely escaped with his life, but it’s not over. His enemy is still out there, nursing a decades-old vendetta that has yet to be quenched. Making matters worse, his guild is coming after him for breaking their rules.

Cade desperately needs credits and somewhere to lie low for a while. To that end, he takes a job on an uncharted world, code-named Nexus, with his new partner. The mission is to rescue a team of missing researchers and recover the alien artifacts they went searching for.

But Nexus quickly proves to be far deadlier than even its Class Five hazard rating would suggest, and Cade soon realizes that he’ll be lucky to escape with his life, let alone accomplish the mission.

Yet unknown to Cade, there is a danger on Nexus that goes far beyond the alien monsters which prowl its surface: a terrifying menace sleeps on Nexus that has been waiting for untold eons to emerge.

And Cade Korbin is just about to wake it up.