For over a hundred cycles, the Marshals of Rhea have defended their strongholds against the wastelands’ many dangers, from vicious raiders to mechanical beasts. To fight these foes they pilot Chargers: eighteen-foot mechs engineered by the secretive Armorers’ Guild.

At Clarion, the ancient stronghold of House Omega, anticipation is high as the Marshals gather for a major hunting expedition. But when disaster strikes and House Omega is left leaderless, it falls to no-nonsense Head Cook Xanthe to investigate. She’s not alone, however, and is aided by an unlikely group of individuals including haughty young noblewoman Biella, world-weary Armorer Stephan, fastidious bodyguard Voss, and whimsical assassin Kane.

As they endeavor to solve this tragic mystery, they unveil truths about their world, themselves, and each other that perhaps should have stayed hidden—for what they ultimately discover will shake their techno-feudal civilization to its very foundations…

Below is an extract from House Omega chapter 1: 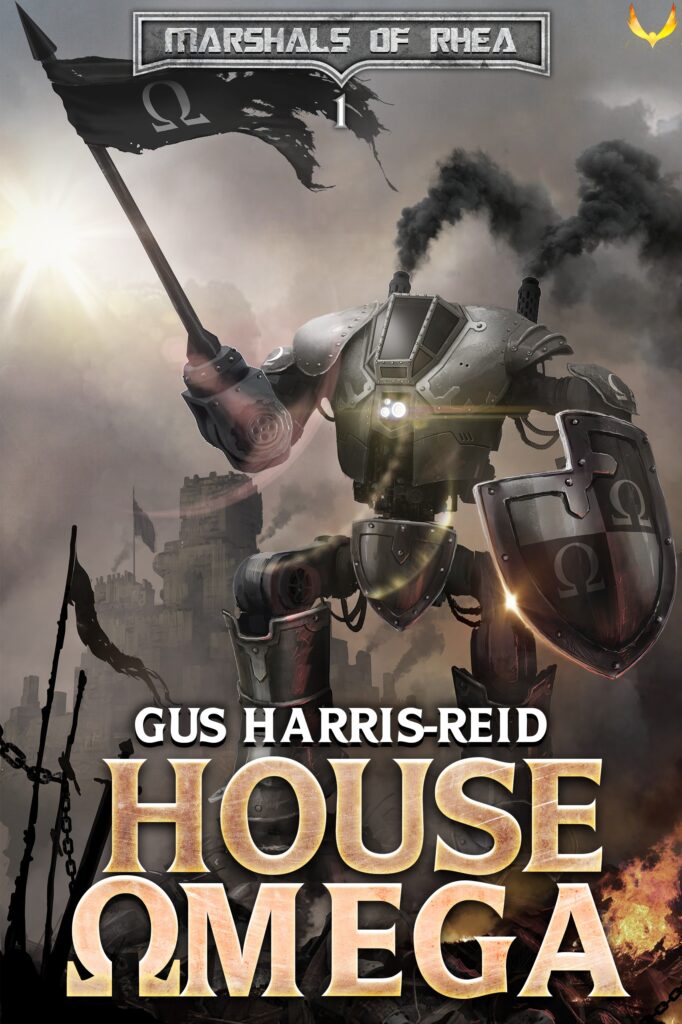 Biella ran a hand down her spine, tracing the outlines of newly grafted plugs beneath the sable fabric of her gown. The implants’ edges were red and raw, and she winced as a copper-tipped finger grazed the boundary between metal and flesh. Nearly a fortnight had passed since the operation, and still they smarted. But then, within the confines of her shuddering, lurching crawler, none of her body felt especially comfortable right now.

She let out a frustrated sigh and gazed out the window, willing the procession to hurry up as it inched its way through the rocky terrain. The crawlers’ armored tracks and wheels ground over the red sand while sable pennants fluttered aloft in the breeze, each emblazoned with the white X symbol of House Chi. In the distance stood their destination: Clarion, stronghold of House Omega, rising up out of the wasteland like a giant stone anthill. Dusk was falling, but a few stray sunbeams still peeked above the horizon and bathed the highest towers in a fiery glow. She might have thought it beautiful if she weren’t so unbelievably bored.

Her bodyguard plodded alongside the crawler, mounted in his ebony charger. The monotonous thud of his hoofbeats and the disagreeable squeak of dust-caked joints wore on Biella’s nerves, and she considered berating him for the disturbance—but what good would it do? Instead, she flopped back in her seat, rubbed her eyes and yawned. After eight hours stuck in this beastly box, even the prospect of the journey’s imminent conclusion provided little comfort.

Worst of all, she didn’t even have a companion with whom to share the tedium. Hopefully her maidservants, in their separate crawler, weren’t having too much fun without her. Still, at least she hadn’t been stuck with Mother and Father this whole time.

During his last address before departing Axiom, Father had reiterated his insistence that each family member travel separately: “to spread the risk; so in the event of one crawler loss, House Chi will endure.” This logic didn’t make sense to Biella—wasn’t strength in numbers the key to survival out in the wastelands? And if they must travel solo, why bother with the crawlers as all? Why not simply pilot their chargers to Clarion? Especially now that she possessed all her implants. She idly rubbed them again.

She had initially resisted the prospect of undergoing the operation, yet acquiesced once Armorer Moris explained how it would enhance the empathic interface to her charger. Still, she was grateful to the surgeons for making the procedure surprisingly swift and painless. She supposed Father deserved some gratitude too, for finally promoting her to Marshal and allowing her to partake in the Hunt at all. His obsession with safety might be insufferable, but it was her own fault. He had only been like this since—

<Mistress, beware!> cried the guard over the hailer link, directly into her ear.

“Need I remind you that I am of age,” Biella replied icily, bristling at his slipup, “and you will address me accordingly.”

Something huge smashed into the crawler. Biella gasped as it lurched sideways, suspension springs screeching in protest as she was thrown against the padded door.

“Scylla just appeared out of nowhere!” called another guard as the crawler righted itself, voice distorted through his charger’s loudspeakers. “It’s alone, but it’s a big one.”

<Armorer Moris,> Father’s panicked voice crackled over the link, <please lower the shutters on Marshal Biella’s crawler. I don’t want her to witness anything distressing.>

<At once, Marshal Dayne,> came the reply.

But it was too late; the shutters swung shut with a clunk, sealing off Biella’s view and plunging her into darkness. A moment later, the empathic lamp set into the crawler’s roof began to shine weakly, bathing the interior in a sickly artificial glow.

A deep snarl, straight from Biella’s nightmares, threatened to overwhelm her fragile composure. The crawler shuddered from a second impact and she suppressed a whimper, cursing her useless guards for not detecting the scylla’s approach—and moreover, for not leaping to her protection immediately.

The ferocious mass withdrew, still growling. She attempted to shuffle back to the center of the seat, her tight gown severely impeding her maneuverability. Her hair caught on something and came loose, tumbling down her back in a golden cascade, but she barely noticed; she was too engrossed in the clamor of combat outside, where the thrum of the chargers’ generators, rasp of claw against shield and crunch of weapons striking the foe suggested that her guards were finally earning their keep. Biella fought against the shutter mechanism and eventually succeeded in peeling back one corner of the steel plate. She pressed an eye to the opening and peered out.