Hey! You’re still here! This is a blog for steampunk book lovers, right? So let’s talk about my steampunk world. I’m urban fantasy author D. Lieber, and I’m going to tell you about my Minte and Magic series.

Minte and Magic is a steampunk faerie tale series (I say series, but really it’s only two books thus far with the second book set to release next year).

The way I do steampunk (and dieselpunk too for that matter) may be an acquired taste. You’ll probably either love it or hate it. There are no grand descriptions, and not a lot of detailed schematics of how each and every device you come across works. My world is developed and explained as my characters interact with it.

This approach isn’t really a problem as my protagonist in the first book, Ember, hasn’t been in the human realm for centuries, so a lot of what she encounters is new to her.

Don’t get me wrong, there is tech and atmosphere, but characters and plot take center stage.

Before I jump into The Exiled Otherkin, the first book in the series, I want to tell you a little about the fuel I created for this world. I mean, there has to be steam-power in a steampunk world, right? So, I created a clean-burning (no smog or soot here) fuel that burns super-hot called minte. Minte is manufactured from a natural resource called saulht. You’ll find out more about the history of saulht, who has it and how having it has changed the economical and political landscape in The Assassin’s Legacy (that’s the second book). I say it’s the second book because it takes place after (and in the middle of) the events of the first, but The Assassin’s Legacy is a spin-off book, where a side character gets his own story. It can be read out of order, though it does have some spoilers if you do it that way.

What else is different about my steampunk world?

Well, it takes place in modern day. I love steampunk Victorian-era books, don’t get me wrong. But when writing my own, I felt it more plausible that certain technologies wouldn’t be invented, that steam-power would be explored more deeply over the natural course of time rather than inserting advanced technologies before they could have possibly been invented in the historical record. This also allowed me to explore how different (and not different) social culture would have developed over time, too.

Also, there are Fae (and other supernatural creatures, which you see in the second book). I loved the idea of putting magic and science together. And Fae have such an aversion to iron that I thought sticking them into a steampunk world would be fun.

Okay. Without further ado, here is The Exiled Otherkin. 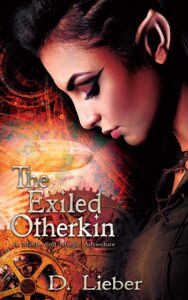 Staying on the move is all half-Fae Ember can think about when she is stripped of her magic and exiled from Faerie. The human realm is completely foreign to the home she had known centuries before.

Her new job on the merchant airship is dangerous, but not nearly as life-threatening as staying within reach of the queen of Faerie. Besides, she’s always been able to handle any trouble thrown her way with a snide comment, a swift kick, and an apathy that protects her from caring about anyone or anything.

When the optimistic Reilley follows her, she tries to ditch the bothersome man. But it isn’t long before his naivety, and his own penchant for trouble, makes her feel responsible for him.

Faeries, pirates, and traveling players meet in this steampunk fantasy adventure as Ember tries to cope with feelings long forgotten and a past that pursues her.

Where to get it (available in print, ebook, and audiobook)