John Sinister, a man with friends in all the wrong places, is hired to look into some shady goings on at the airship factory. It might be nothing, but with the fortunes of the greatest inventor in the Britannic Empire at stake, you can bet John will do his best to get to the bottom of things (even if his best might generously be described as mildly shambolic). But when people start dying, and it looks like there might be a killer on the loose, John has to team up with Dexter, the world's only walking, talking mechanical cat, to try and figure out what the hell is going on. He’d rather not, but it doesn’t seem to be up to him. Dexter is going to make sure this “lazy sack of meat” does the job he was hired for if it’s the last thing he ever does. With secret societies, arrogant aristocrats, and criminal chocolatiers to contend with, John and Dexter are going to have to keep their wits about them if they’re going to come out of this alive. And if John happens to fall in love with his employer’s daughter along the way, well nobody said catching a killer was going to be easy now did they?
About the Book
Error happened.
Details
Author: Keith W. Dickinson
Series: A Hammersmyth Novel, Book 1
Publisher: Hammersmyth Press
Publication Year: 2020
ASIN: B08FG9TWPH 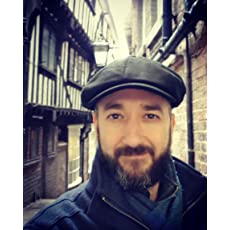 If you like your crime cosy, your airships antiquated, and your talking cats with a dash of sarcasm, you've come to the right place.

I am a writer of steampunk, fantasy, crime, plus whatever else takes my fancy. I don't do serious, there's enough serious in the world, but I do do important (and no, I'm not above laughing at the phrase "do do" either). Let me put it this way, if you're a Terry Pratchett fan we're going to get along swimmingly.

Click on the yellow +Follow button above to ensure you don't miss out on any new releases or special offers. And if you want to connect with me directly you can follow me on Twitter or Instagram - @keithwdickinson - where I chat and post photos about all sorts of things; most of which is to do with writing, and only some of which is to do with tea and biscuits.