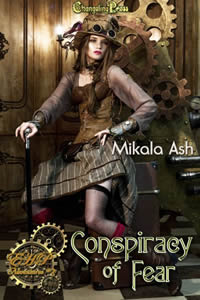 Conspiracy of Fear by Mikala Ash

There’s a bloody serial killer on the loose in foggy London, and music hall singer, The Songbird of Surrey, fears her best friend has fallen victim to the fiend. When her own fiancé, who she sent out to find her friend, goes missing as well, she seeks the professional help of the EHP Investigation Bureau to solve the mystery.

Intrepid crime fighter Elizabeth Hunter-Payne ventures into the dangerous streets of London’s East End and explores the seamy side of adult entertainment to confront the Collector, the terror of Whitechapel. His elusive puppet master, Vladimir the Mesmerist, is pulling the strings of conspiracy, and threatens the very foundations of the empire.

Elizabeth meets the ultimate automaton, Hercules, but what service can a metal man of cogs and gears perform? Guns, knives, and half-bricks come into play as Elizabeth fights for survival, and her sanity, in another thrilling steampunk adventure. 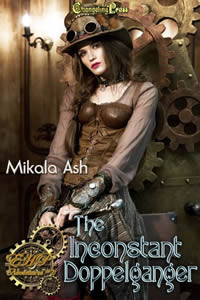 In a time of rapid technological change which challenges the roots of the empire, Elizabeth witnesses the impossible. The arrival of her late husband’s doppelganger takes Elizabeth Hunter-Payne to the brink of insanity.

Captain Nathanial Royston, late of the disgraced East India Company, claims he is innocent of the murder on the Great Northern Express.

With the coolly professional Miss Clayton at her side, our feisty heroine investigates three nasty suspects to get to the bottom of the mystery. While doing so, Elizabeth is faced with a cruel reality and comes to a decision that threatens her future happiness.

Another thrilling steampunk adventure with steam trains, miniature automatons, as well as guns, knives, and a handy half-brick in the reticule. 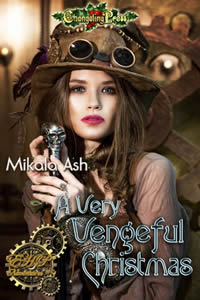 Elizabeth Hunter-Payne is convalescing after her brutal takedown of a ruthless killer. Troubled by nightmares and a nagging ghost of a memory, she is approached by Horatio Cumberland. He and his wife Fleur, the greatest scientist couple in the empire, hold radical ideas of sexual freedom. They report a stolen automaton, a highly sophisticated sex machine.

Miss Clayton, the cool, prickly and experienced agent of the Queen, joins the Investigation Bureau and takes on the case. Her investigation takes her to the shadowy London docks, the music halls and pubs of Whitechapel, as well as a luxurious four-poster bed.

Is the theft just a routine crime, or is something more afoot? Can Elizabeth, working in the background, solve the puzzle and defy her injuries to save Miss Clayton’s life? Another thrilling steampunk adventure with brilliant, sexy scientists, automatons, ruthless spies, submarines, and razor-sharp swordsticks.

A murder at a séance. In an age of rationalism and science, spiritualism has taken hold of the popular imagination. At the home of Lord and Lady Summerhayes, a séance ends in a horrific climax -- a man is drowned in ectoplasm! Impossible! But there’s nothing Elizabeth Hunter-Payne and her Investigation Bureau like better than to investigate an impossible mystery.

Victor Drake was at the table and tried to save the hapless victim. His smoldering good looks and irresistible allure take Elizabeth’s fancy, and her carnal desires are reciprocated. Together, can they solve the mystery? Another thrilling adventure set in a steampunk world of airships, steam-powered aircraft, and swords disguised as lavender umbrellas.

More than ten years have passed since newlywed Lady Carlyle used magic to save her unborn children, and every day she dreads the return of her demonic husband.

Linked by death, the gallant Captain Justin Quin and his troubled lover, Lady Julia Molyneux, are on the hunt for a killer. When their paths come together malignant forces of undreamt power are unleashed -- forces that will shake an empire. 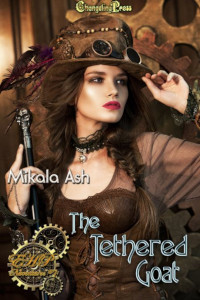 Hell-bent on revenge for the death of her husband, Elizabeth takes the initiative and sets a daring trap for Vladimir, the Russian spy she suspects of the deed. Meanwhile, Peter Smythe, a handsome and dedicated correspondent, is investigating the disappearances of street people in the docklands of London.

The discovery of a horribly mutilated body of one of the victims reminds Elizabeth of the horrendous acts perpetrated by the Whitechapel murderer known as the Collector. Elizabeth slew that monster, itself a creature of Vladimir, and she fears this is a new apprentice.

Sparks fly when Peter and Elizabeth come together, and they set off on a roller-coaster adventure in a fogbound steam-driven world. When the hunted becomes the hunter, Elizabeth is the bait! 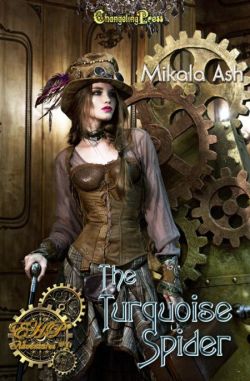 The Turquoise Spider by Mikala Ash

Elizabeth Hunter-Payne is an adventurous widow with time on her hands -- a dangerous combination in Victorian London of 1859. Seeking excitement in a time of radical change, Elizabeth starts her own Investigation Bureau.

Armed with an inquisitive eye for detail, the capacity and boldness to ask obvious, if blunt, questions, and most importantly of all, her ability to keep her mouth shut, Elizabeth is quickly immersed in a case of kidnapping, smuggling, murder, and general mayhem. With guns blazing, steam-cars steaming, and clockwork automatons of a salacious nature going clickety-clack, can she save the son of a violent industrialist? Can she recover the priceless Turquoise Spider from the vicious clutches of underworld thugs behind one of Victorian London’s infamous Houses of Introductions?

The survival of the Empire may well depend on the fortitude, brazenness and deductive powers of the irrepressible Elizabeth Hunter-Payne. 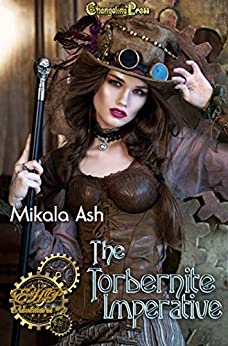 The Torbernite Imperative by Mikala Ash

Can Elizabeth assist a strikingly handsome doctor in solving the mystery of a gruesome murder?

Not a day has passed since the affair of the Turquoise Spider, and Elizabeth Hunter-Payne and members of her EHP Investigation Bureau have already launched into another do or die case, this time involving murder, deceit and airships.

What is Torbernite, and why is it so important? What has it to do with airships? Follow the indefatigable investigator as she tracks down the clues in her own impulsive style while falling for the charms of two virile lovers, all set against the backdrop of a dangerous steam-driven world.