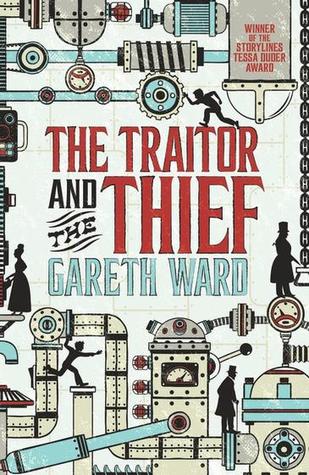 The Traitor and the Thief

Discovered thieving at Coxford’s Corn Market, fourteen year old Sin is hunted across the city. Caught by the enigmatic Eldritch Moons, Sin is offered a way out of his life of crime: join the Covert Operations Group (COG) and train to become a spy.

At Lenheim Palace, Sin learns spy craft while trying not to break the school’s Cast-Iron Rules. Befriended by eccentric Zonda Chubb, together they endeavour to unmask a traitor causing havoc within the palace. After an assassination attempt on the founder of COG, Sin realises that someone closest to him could be the traitor.

With no other option, Sin is forced into an uneasy alliance with the school bully, Velvet Von Darque. But can he trust her? And will COG try to bury him with the secrets he discovers?

The Clockill and the Thief by Gareth Ward

Sin is dying, poisoned by his blue blood. His troubles deepen when the traitor who poisoned him escapes from the custody of the Covert Operations Group and sets out for revenge. COG tasks Sin, his friend Zonda Chubb and their frenemy Velvet Von Darque with recapturing the traitor, whatever the cost. Taking to the air in pursuit, they must battle skypirates and the terrifying Clockill to complete their mission. But with his condition worsening, can Sin survive long enough to save his friends, himself and the day?